This story intrigues because it combines the hi-tech tools of the present and future with an anachronistic escape on horseback.  Within these two extremes lies a story of rebellion and insurrection.

James apologizes for his previous lapse in professionality and volunteers to join the crew reporting on Operation Frontier Reprisal. Da’Shelle will also be on site under the ruse of training younger censors and video editors how to make quick decisions as events unfold in the field.

She tells him their strategy: they will feign an amorous mood and walk down to a patch of shrubbery on the riverbank. There, they will toss their handscreens, camouflage themselves, and cross the river. Da’Shelle’s cousins will be waiting with electronic jammers and Quarter Horses on the other side. James admits that he has no idea how to ride a horse, not even a half or “quarter” one. Da’Shelle laughs until her scar aches, and over the warm glow of pain she murmurs that he will either become an expert rider that night or die trying. Either way, she assures him, her family will be impressed. “Will you tattoo me if I die?”

The news crew have set up a cluster of tents next to the Commodore Barry Bridge on the New Jersey side. Kazimirs guard the encampment and vehicles, and patrol the bridge and the riverside.

After spending the afternoon and evening reviewing plans for the next day’s shooting, James acquires a low-end pornoscan without music or an effects soundtrack. He sets it to a scene where the only sounds are the two actors’ lusty cries and puts it on an infinite three-minute loop with the speakers turned up high, then lays the handscreen face down under a scarf beneath some bushes. He takes off his clothes and raises his eyebrows at Da’Shelle, who has also disrobed except for a pouch belt around her waist. They heap their garments up in a pile on the ground and he begins rubbing Da’Shelle’s breasts, shoulders, neck, and face with black grease. She then does the same for him and they wade into the cold water, keeping their gasps quieter than the ones under the shrubbery.

They are met on the other side by Da’Shelle’s cousins, who are dressed entirely in black. The first one to step forward is wearing a wetsuit. He hands the shivering pair dark clothing and black cloaks made from blankets that have ties to fasten at the neck. The cloaks have rudimentary sleeves made by tacking the corners with a few large running stitches to keep them close to the body while riding. James and Da’Shelle wipe the grease off their upper bodies with the bottom corners of their cloaks and get dressed before she makes introductions between James and her cousins. Leo has darker skin, a powerful build, and wears his long hair tied back; Talley is longer-limbed, has short hair, and wears a patch painted with the seven dog skulls on his old-fashioned hooded sweatshirt.

“And who are you?” Da’Shelle asks the lightly dappled black-bay mare whose reins she is given by Leo. She puts a hand under the creature’s throat and strokes its cheek on the other side, while pressing her face against the near cheek and blowing her breath out slowly. She notices that the horse’s white socks and the star on her forehead are concealed by dark grease. The other horse, a gelding, has his legs and face blackened and he wears a black sheet over his back and has black fabric fastened around his neck. When the wind blows, the sheet reveals a coat as bright as freshly-stripped copper wire.

“This is Twylah; she’s out of Cold Front, by Jersey Devil. She’s my fastest mare, and she knows the way home once you get close to the old town. You’ve got Kitane’s racing saddle, and – he reaches out with a small bundle and fastens it around her neck – “Kitane’s riding with you tonight.“ He kisses her cheek. “And so is … ”

“Leo, don’t say his name – don’t you dare. And it’s been a long time since I’ve ridd … “ her voice started to break and she took a few deep breaths.

“You don’t forget some things, no matter how long it’s been. You always rode good – now get up there,” and she bounced twice on the ball of her right foot, swung it lightly up and over the saddle, and then adjusted her stirrups.

“Cold Front – wasn’t she the filly born during the blizzard just before I …” “I’ll fill you in on the bloodlines when we see you at the farm.”

“Look, James, this is Sol – and Da’Shelle, he’s out of Blood Moon by Resplendence. He’s fast and pretty steady, but he’ll shy if he scares up a white-tail, so let Talley and Da’Shelle stay in front. I heard you don’t ride, so your main job is just to hang on tight.” Leo hoisted the light, gangly man up, who he flailed his legs until he was sitting properly astride his mount. Talley silently adjusted his stirrups and showed him how to hold the reins.

“You’re heading north and then northwest – you’re safe when you reach Okehocking, but not yet halfway home. And ride like bats out of – never mind; just get as far as you can as fast as you can before we do the bridge. The horses aren’t going to like the sound.”

Leo was already grinning before James finished his question. He patted the saddlebag he had removed from Twylah: “Sticky, sticky, boom!” His eyes widened as he envisioned the explosion, and Talley passed him something wrapped in fabric that he’d taken out of his own saddlebag on the liver chestnut hitched nearby. “Good luck, and wait where I told you,” he said to Leo. “I’ll see you there tomorrow before noon with fresh horses.” Leo repacked everything into a plastic backpack which he swung over his shoulder, and Talley led the other two riders first slowly, and then very swiftly into the foggy, moonless night.

Melinda Reidinger liberated herself from university teaching in 2019. Now she makes a living translating academic and literary works from Czech to English. In her own academic works, fiction, and non-fiction, typical themes are ways people cope with inhumane political systems and technology, drawing closer to the land, skillful use of natural resources, and living life with verve and imagination. In the future, Melinda will be offering a writer’s retreat in her village. As for now, when she isn’t working she can usually be found haunting riverine hills and forests in Central Bohemia, flanked on each side by unusually large wolfdogs. 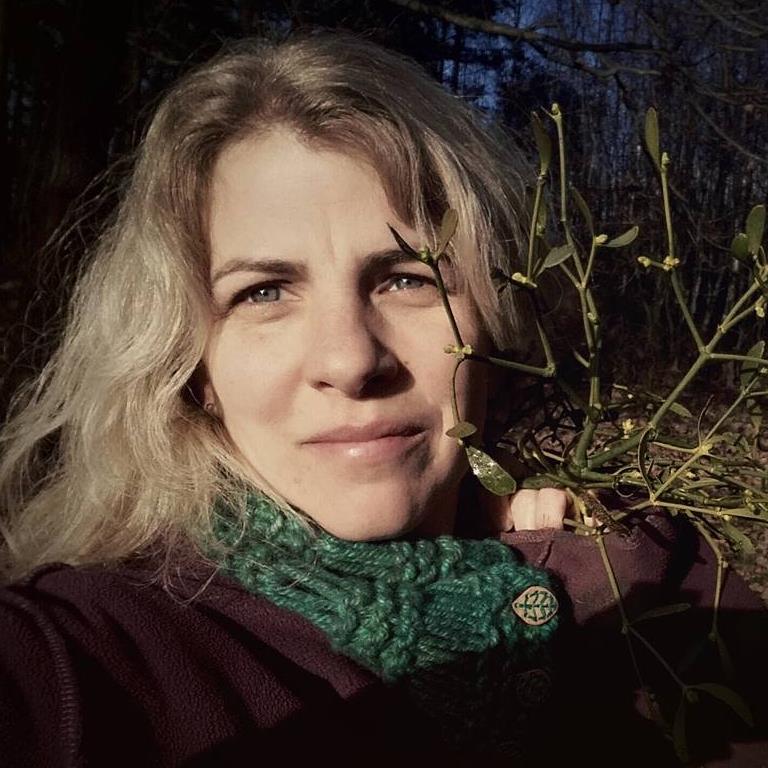