Sometimes going back into an author’s history of favorite books can turn up some hints about the work they eventually pursue as a writer. Starting out in the 1940s, you went from Hardy Boys, various war novels, the Jungle Book, and “way too many comic books,” to Gustave Flaubert’s “Madame Bovary” (1856) and Fyodor Dostoyevsky’s “Crime and Punishment” (1867). As a poet, you list as an influence John Donne, an English poet who was Catholic when Catholic wasn’t cool. (You are also a fan of Raymond Carver, the Yakima-raised minimalist who passed away in Port Angeles in 1988.) You’ve published a study focused on poet David Wagoner, who like you was born in Ohio and ended up in the Pacific Northwest, and Hemingway, who famously spent time in Florida, where you graduated from high school and started your academic career. You’ve also tried your hand at biography, covering Col. Edward Steptoe, who despite suffering a disastrous defeat at Pine Creek nevertheless had a rather prominent butte named after him. What more can you tell me of the connection between the works you were influenced by and the works you eventually produced, or maybe even are today in the process of producing?

Among the various influences on my writing that I did not mention, and that was one of those “fundamental,” almost subconscious, ones was Robert Louis Stevenson’s “Child’s Garden of Verses” (1885). My mother would read from that to me when I was very young, especially if I was feeling ill. I suffered so badly from chronic bronchitis when I was in Ohio that our doctor told my parents they needed to get me into a milder climate. So, I have lovely scraps of memories of our visit to Texas (New Braunfels, near San Antonio, appealed to Mom and Dad), but we ended up going down to Florida in 1950, where I would turn eight that fall. A month or so ago I wrote what I like to think is a very good poem about that trip—reading Pogo comics, encountering racist postcards, etc. Back to R.L. Stevenson, though, I do think his rhythms, his meter, got to me and implanted some sort of sense of line, even in my unmetered (free verse) poems. It had what I’d call a deep impact.

Did you have a favorite poem from “Child’s Garden of Verses”?

“Dark Brown is the river. / Golden is the sand. / It flows along forever / With trees on either hand.” (It does go on.)

Anyway, my maternal grandparents moved down from Ohio just a couple of years after we got settled, and Grandpa Stullenburger (retired after more than 30 years working in the deep coal mines of eastern Ohio, which eventually qualified him for black lung benefits) opened a very successful gas station (Pure Oil—“You can be sure if it’s Pure”) which featured a terrific rack of comic books, which my brother and I would pre-read for any customers. We pretty much read ‘em all. My favorites were such comics as “Star Spangled War Stories,” “Red Ryder,” and “Terry and the Pirates,” all for a dime (but we rarely bought one), and I was not very particular. Except when it came to the Classics Illustrated series (15 cents each). They were the best, and I will now confess that a fair number of literary classics, from England and the Continent, I have to this day perused only in the Classic Comics version. Maybe these were graphic novels ahead of their time.

My father was a great history lover (and keeper of the family genealogy), a man who would pull over and read nearly any historical marker he came across, and of course Florida was and is full of them. So, I was steeped in history, and I knew of the various family relatives who had fought for the Union during the Civil War. That sort of thing. We visited battlefields and of course all the sites in St. Augustine and elsewhere in the state. In fact, what started me on my Col. Steptoe book was a marker outside Rosalia, Washington, where his battle occurred in 1858.

I can definitely relate to your father stopping for historical markers. I did that a lot when I was driving around in the States. Usually a story of someone like Col. Steptoe produces some sort of insight that transcends the events of his life. Was this something you were able to share in your work on him?

What propelled me in my work on Steptoe were the handful of his letters archived at the University of Washington library, and then a few more I scraped up, including some official correspondence in the National Archives in DC. Would that there’d been at least a dozen more! He wrote well, but he wasn’t “a writer.” He did not have “flair.” But his letters hooked me. They told me either “just enough” or “almost enough.” Of course, I drew on many other sources, including newspapers of the day and official reports, but at the end of it, I found myself wanting to fill in gaps and follow some fictional possibilities that still attract me.

If I do proceed with the novel, I hope I can make the first-person narration work, and I look forward to building on what I know of the man. When I read that historical marker, I saw that he died in 1865, so I immediately thought (he’d have been 49 or 50 by then) he must’ve been a casualty of the Civil War, and I wondered which side he was involved in. Turns out he wasn’t well enough to accept the commission the Union offered in 1861, BUT in my novel, he will do that, partially disabled though he was by a stroke. Or maybe he’ll throw in with his various relatives (half-brothers, cousins) and fight with the Confederacy. I remain undecided on that matter. I doubt that I’ll have him die in combat, though. He married in 1860 and had a daughter who died in 1864 there in Lynchburg, Virginia.

He was generally hailed as a “gallant officer,” a common epithet of the day, but he was understated in many ways, a low-key guy, modest, I think, not very assertive. Maybe he’d have failed as a field officer, or maybe he DID fail in the Washington Territory back in 1858, so my fictional Steptoe would see the Civil War as a chance for redemption, in a way. 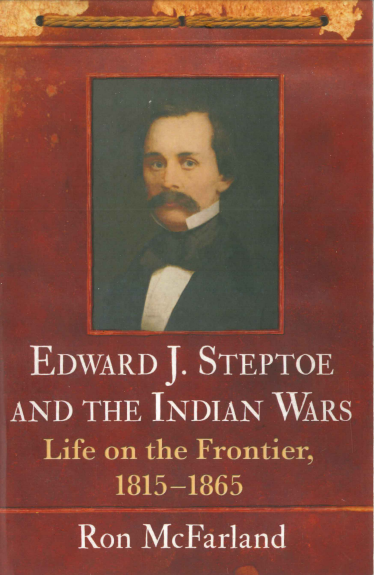 The American Civil War has so many stories of survival that could just write themselves, many of which might inspire strength within so many who are struggling to survive around the world. Consider Eastern Ukraine, for instance, a classic brother-against-brother scenario, almost a “what-if” case history of what might have happened if the South secured British support (despite Britain’s position against slavery at the time).

Once you get your Steptoe story written, do you think you’ll try to get it translated and sell it internationally?

Of course, I’d be very flattered if someone (anyone) were to want to translate the novel into any known language. My only foray in that direction was a little poem by Mikhail Lermontov, “The Sail” (1831, or, given the Russian non-existence of articles, it could be “A Sail”). A guy translated a few of my poems into French a few years ago—don’t know how he stumbled across them.

Apparently there is a Wikipedia page for the Classics Illustrated comic book series you mentioned earlier – that did seem like an idea that should have been much more popular than it appeared to have been. Granted, it would be a stretch to call a graphic novel a literary work, but have you nevertheless ever considered trying your hand at writing something like that, or maybe adapting one of your works into that format?

Never did, really, although a colleague actually taught a 400-level lit course on the graphic novel, and I think that is fairly common these days (anything to hook a few more students!). If I had any trace of the artist in me, I suspect I’d be tempted. In fact, our book group did the graphic novel “Fun Home” a couple of years ago—I understand it’s been fashioned into a musical now. Christmas before last a relative gave me Jason Lutes’ remarkable, large graphic novel, “Berlin: City of Stones” (2000; maybe the best of the lot—certainly the best one I’ve come across).

I’ve always been a big fan of Art Spiegelman’s “Maus” (1991). I’ll have to see if I can’t find Lutes’ work someday. Could you go a little more into what “Fun Home” was about?

Oh yes–Alison Bechdel’s graphic novel (memoir, actually) takes place in a funeral home and involves a difficult father-daughter relationship, as the dad is gay (closeted)–he runs the funeral home and teaches high school English–the “speaker” realizes she is lesbian . .  . Well, I don’t want to “ruin the story.” It’s tragi-comic, or comi-tragic, as you prefer, and really quite fascinating and definitely NOT for kids!