I understand that you’ve done more than compose enjoyable literature. You’ve had considerably more somber experiences as a news writer. On Apr. 20, 1999, you were working as the Editor-in-Chief of IntraDenver.net, an Internet-only news service based in Colorado, when two high school seniors (better left unnamed – no sense in wasting precious memory on them) shot indiscriminately their fellow students at Columbine High School and then killed themselves. Your team was one of the first on the ground covering the event, and your coverage won an award for excellence from the Colorado Press Association. How have such real-world experiences affected your writing?

Here’s a thing. I’d love to find away to incorporate some of those real world experience into fiction, but let’s take Columbine, as an example. If I was to fictionalize it then I risk triggering some of the many people who have been through gun violence of that sort. Possibly worse, I could take the punch, the reality, of that tragedy away. It’s so hard, because there’s a lot to be said and not everyone can hear important talking points when our media runs on a three minute news cycle. However, these types of events, when fictionalized, can actually sit in a different part of the brain. It seeps in and slowly changes us.

Sometimes, it’s easier to filter events through the theater of the mind than it is to just be told what we’re supposed to think and feel. Comedians have it hard these days, as everyone is so sensitive. It used to be that comedy could make the audience laugh at the absurdity of the world, but then they’d go home and let the reality of that world sink in afterwards. You can’t do that anymore in comedy, and it’s hard to do in fiction. Those who do it, do it by writing very well and walking a line where, at any moment, they could become the internet’s bitch of the day.

Comedy illustrating the absurdity of the world, of course, was what spawned publications like “The Onion” and TV programs like “The Daily Show.” Are you suggesting that such media wouldn’t have much of a chance if they tried to get their start in today’s world?

I watch “Last Week Tonight with John Oliver” religiously. But, it’s on HBO, right? The only way he gets away with the type of satire he does is because HBO has the money to fend off the countless lawsuits and the constant barrage of hate-mail that follows each episode.

Yeah, it’s harder to get that raw edginess on the air anymore. Several shows have been pulled off the air for trying to balance humor and political commentary. We used to be able to all laugh at ourselves, see the mirror comedy was holding up, but nowadays, society attacks that type of humor as being destructive. It’s sad because we need to see how absurd this all is in a way that makes us desire for change in a healthy way, not the “burn it down” approach.

Have you ever considered writing non-fiction about Columbine?

Not my story to tell. My part was so small, so fast, that it barely matters. What does matter is that there are people who have told their story, both from outside and inside, that have done it better than I ever could. I write escapism. I rarely deviate from it. 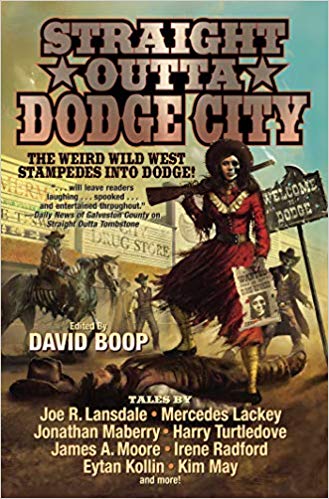 That’s a whole class in itself! LOL! The short version is…If you’re taking a real event in history and then reworking it as a fantasy, then make sure you know all the details about the event you’re fictionalizing. Don’t write a Western with white men, white hats, and white horses. This was a movie-driven cliché that isn’t even close to how it was back then. Even if you’re writing sci-fi, make sure you understand the intricacies of space travel, colonizations, forming new governments, new religions. Your readers deserve your best, and will find the flaws in your story if you missed something.

That makes sense. How much research do you do before you begin creating?

A lot! I mostly write historically set fiction, whether it’s weird westerns, pulp heroes, or noir. I only have one ongoing contemporary series, the “Trace Walker Temporary Mysteries,” and occasionally I’ll dabble in Urban Fantasy or Hard Sci-fi, but I love looking at the past in a new way…y’know…with aliens, and zombies, and whatnot. The history that was, mixed with the history we wish could be. Retro-futurism I think it’s been called.

The tomorrow that never was. That’s a fun genre to play in. 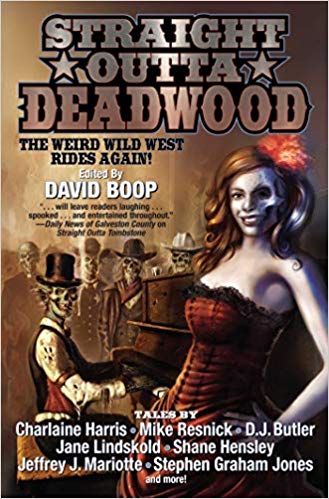 I often enjoy reading through the influences that a writer cites. Your set of influences was no exception – it included, from your childhood, the Narnia series (my 10-year-old daughter went through the Polish-language version of these last year – I’m still amused how far C.S. Lewis’ reach to audiences has been since the time I also read these as a child), and Alan Dean Foster’s tribute to Camper Van Beethoven’s “Take the Skinheads Bowling,” “Glory Lane” (1987). Then you listed authors by category – Arthur Conan Doyle, Agatha Christie, Rex Stout, Lyn Hamilton, and Michael Connolly for mystery (and by association, noir); and Foster, Brian Dailey, Kevin J. Anderson, Michael Stackpole, and Jack L. Chalker for science fiction. You also cited the fantasy works of Craig Shaw Gardner as inspiration.

But the work that you seemed to emphasize as among the most important was Patrick Rothfuss’ “The Name of the Wind” (2007), the first book of his “Kingkiller Chronicle” series. What makes this book special and what within it would you like to emulate, or perhaps have already emulated, in your own writing?

First, a shout out to all the authors you’ve listed above. They are my idols, my mentors, and I’ve been fortunate enough to work with many of the ones still alive. I wouldn’t be here, answering these questions, without them.

It goes back to what I said above about storytelling. Rothfuss writes like I talk. In that I mean, he knows how to tell a story even if it’s going to take a big-ass book series to do it. And unlike many other big-ass books, Rothfuss doesn’t weight it down with exposition, or history, or overly complicated forms of magic and so forth. He tells the story to you as if you’re sitting across the den from him, and he’s telling you about his day. This is an amazing skill. It never feels verbose, or heavy and, just when it would, he changes the narrative and takes you in a new direction. It never gets boring and it’s impossible to put down once you realize what he’s doing. I wish I could write like that. Maybe someday.

How do you avoiding weighing down stories with excessive exposition? Is it a matter of avoiding “information dumping” and trickling details over a longer stretch, or is there a limit to the back-stories that you share in the text?

If we go back up to the three elements of Narratology, the idea is to layer the exposition through the text, the story, and the fabula. If you spread it out in different ways, it won’t seem heavy-handed. A character causally drops mentions  something important, or the text itself may reveal a cultural norm by writing words in a particular style (i.e. aliens don’t use conjunctions), or how the story itself presents the information in terms of theme. A lot can be said without spelling it out on the page.

For now, the way I recite a story verbally (like how my day was, for example) is like Rothfuss, but my craft still has a way to go. I’m plot and action focused, and I haven’t perfected that all important third part of narrative—voice, yet. I’ve just turned in a middle-grade novel to a major publisher for consideration. I think is the closest I’ve gotten to that level of narrative or storytelling. I guess I’ll have to wait for time to tell me the story if I’ve succeeded, or not. I will always be my harshest critic.

What has been your personal favorite of the stories you’ve created?

“Me-ality.com,” which was just released in an anthology named, “Strife and Harmony,” was the story I wrote after my mom’s passing from cancer. It’s a very personal story and helped me work out some things. I think, though, that each new story becomes the favorite, as I step up my game. When I look back at what I’ve written in the past versus what I’m doing now, I find myself shocked that I now read more and more like the people I’ve read in the past. It’s satisfying.  Oh, and of course, the story I wrote for “AWwYP.” I still love that story. One of the few non-genre pieces I’ve ever had published.

What’s your latest novel about, the one you turned in for consideration?

Can’t say yet. Don’t want to jinx it. I can say that, given just about any quarter, I have short fiction work released. Between my “Trace Walker Temporary Mysteries” series on GumshoeReview.com, to my weird westerns set in the “Drowned Horse Chronicle,” there’s always something new. I love writing short fiction and grab at any opportunity to expand both those worlds.

I have several novels in beginning phases, though. Hopefully, before long, I’ll be able to tell you more.