I am pleased to get an entry from the other side of the pond, Prague, to be exact, from an attendee of one of my writing workshops conducted there this last spring. Lidia is working on her PhD, but simultaneously writing her first novel.  I am reminded that one of my favorite writers, Joseph Conrad, did not even speak English (he was Polish) until he was 20, and then began to write in English.  Kudos to Lidia!  Here is her untitled entry into our contest “One-of-a-Kindness.”

Sometimes I can’t help myself and wonder if there is anything good left in this world. When I watch the news I hear about murders, conflicts and various problems, such as pollution or thinning ozone layer. When I step out of my apartment I notice people arguing and fighting. When I take public transportation, especially at night, I see strangers pushing each other. There are over-speeding cars and motorcycles on the roads, litter on the streets, empty bottles in the rivers… Don’t even get me started, cause I see it all… and so does the rest of the population. Why is that? Is the world really that awful and beyond saving like we read in all those newspapers? Is there really no kindness left in us?

Call me an optimist, or a clueless person, or whoever and whatever you want, but I don’t think so. It’s a matter of perception. We just need to take a closer look. Yes, a lot of terrible stuff is being shown on the news, but that’s because they are meant to make us aware that the world is not perfect and fluffy and for us to be conscious, but not scared. Yes, random people that we see on the streets sometime fight and argue, but they also hug, and smile, and laugh. And yeah, strangers might push each other on the metro or trams, but from time to time they offer a seat to a pregnant woman or a person in need. Someone might pick up some trash and put it in a garbage bin or one might give a coin to a homeless person or water to a stray dog during a hot day.

We can always talk about a big good deed like writing a fat check to a charity or participating in a rescue mission in a flooded area, but we generally forget about small things that people do on a daily basis. I remember one day I had a terrible day at work and it seemed like my life was falling apart, so I started crying at the train on my way home and some stranger gave me a tissue. That little act of kindness made me feel so much better.

When I  begin thinking about acts of kindness that I have recently witnessed, so many come to my mind. One of my friends saw a young student from abroad sleeping in a park, as he couldn’t afford a hostel, so my friend said that guy can stay at his place for a couple of days without paying a rent. Three weeks ago I joined my mates and we went to a tea festival. Prices for tickets for tasting different kinds of tea were through the roof. So we decided just to walk around and enjoy the atmosphere. To our surprise, we were offered to try various sorts of tea for free. That was an amazing day! When I traveled with my dog on a train, a passenger was eating a sandwich with ham and my pooch loves meat, so he sniffed it immediately and started looking at her with those big puppy eyes, so she was kind enough to take it all out of her sandwich and give it to my dog. Just imagine that! But there is more. I saw: a woman fallen down and a bunch of strangers were helping her, people were donating money for a good cause, there was a line in a shop and I had only one item to buy so people in front of me suggested that I pay first.

Unfortunately, quite often we take this kind of behavior for granted. However, those tiny acts shouldn’t be overlooked and shouldn’t be underappreciated. When we start noticing them, we’ll understand that the world is not that awful after all and it is full of genuine people who don’t make a fuss over their deeds. So let’s be more attentive and don’t forget to say thank you when someone is being nice and kind to us. Better yet, let’s do those small things ourselves, ’cause remember what goes around comes around.

Not so long ago a former colleague of mine mentioned that she doesn’t believe that there are good and bad people, ‘Our contest goes international with ’cause it’s not all black and white.  It reminds me of an old  Cherokee tale of two wolves, which says that there are two wolves in each of  us: an Evil one and a Good one. And the wolf we feed wins. It is as simple as that… So let’s feed the right wolf. Let’s make a world a great place together. 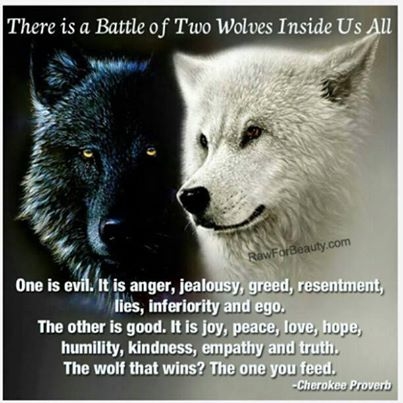 Deadline for you to submit your own story of goodness has been extended to Sept. 30th. Here are the details: