I am pleased that we have our first full-fiction entry into our contest.  At least, I think it’s fiction.  With Mike Casper, you never know. Mike is a former contest winner here, and author of “The Sing-Song Child:  A Love Story,” which, as I think of it, is all about kindness.  Details about his novel are at the end of this read, right after critical information about the best thing to come out of Philadelphia since brotherly love. We’ve extended the contest deadline to Sept 30th, so you still have time to enter. Details here: https://awordwithyoupress.com/2018/08/26/one-of-a-kindness-our-new-contest/

A week ago, my editor, Lenny Burris, called me into his office and tasked me to write a feel-good ‘kindness of others’ piece for Thanksgiving, a month away. I laughed, lit a Marlboro, and poured myself a burnt coffee from the dented percolator on his desk. Kindness? Me? I’m Tim Baker, and I troll the seamy side of Philadelphia for Pennsylvania’s largest newspaper, the Philadelphia Beacon-Examiner. Crime is what I write, the more heinous, the better. I keep a small pewter engraving on my desk that reads, ‘IF IT BLEEDS IT LEADS’ and, brother, stories under my ‘Baked Philly’ byline are soaked in blood.

“Not my style, Len. Tap a cub reporter instead.”

I was surprised when Lenny pushed back. “I’m afraid not, Tim. I’d like you to get out of town for awhile. Smell the fall leaves, listen to the birds, travel the back roads, meet the people”. He bummed a smoke, and I tossed him the pack. He looked at it for a second and smiled. “Head to Marlboro country, Bake. I’ll cover for you till you get back.”.

I asked if it was my hilarious expose’ of the mayor’s nephew arrested with twin midgets in a mafia-run whorehouse, and was he catching some heat from the mayor right before elections.

Lenny shook his head no, but his tic betrayed him, and I felt a pang of guilt. “Hey, Bake, it’s 1973”, he said.  “You’re single, you haven’t been out of the city for years, and you could use a break. There’s still good in people. Find that good. Come back in ten days maybe two weeks.”

A week before I’d enjoyed an old article in The Saturday Evening Post about West Virginia’s remote mountain towns. So, early the next morning I tossed a few things into my bag and headed to see them for myself.

Lunchtime found me in a little town in rural southeastern Pennsylvania where I stopped for a fill-up, a sandwich, and a cigarette. The locals were friendly and helpful, traits I’d grown unaccustomed to in my gritty city. Three days later, now into northern West Virginia and the cool, misty Appalachian Mountains, it seemed as if every town I stopped at and every motel I slept in were populated by the same good people.

I met her in a small, home-style café just outside of Pickens, West Virginia. AnnMarie had visited her family and was now waiting for the bus back to her university teaching position in Hershey, Pennsylvania. After two hours I felt as if I had known her for many years, and told her so. Blushing, she confessed that she wanted me to meet her family, so thirty minutes after I paid our bills, we pulled up in front of a neat, two-story log home nestled in Denney Run Hollow. In this remote ‘holler’ it felt like time had stood still.

Her family traced its lineage back to Scotland two centuries before, and its brogue was measurable on the older folk’s speech. Fascinated, I tried my best to pronounce their words, but my clumsy efforts produced only laughter and good feelings between her family and me.

One thing led to another, and before long, night had fallen. The twisty mountain roads had become dangerously thick with fog, so after a sumptuous dinner—and some potent moonshine—I wobbled to my bedroom.

A tom turkey’s strumming woke me at daybreak, and I found AnnMarie and her family already doing chores. Her face was radiant, and grandmother hugged me good morning.

Another day passed, then a week, then it was time to head back to my byline. I realized that I didn’t want to leave AnnMarie. In a quiet moment together, I said so. Holding my hands and crying softly, she gently kissed my lips—our first—and said that’s what she hoped I would say.

I filed my report by US Mail with Lenny and to my great surprise, won a Pulitzer Prize for its literary beauty. Book offers flooded my desk, so I retired my byline and moved to West Virginia to become a full-time author. Seven months later, Lenny was my best man at AnnMarie’s and my wedding. The mayor of Philadelphia, who was re-elected by a wide margin mainly by the humorous way he handled his nephew’s scandal, sent a beautiful display of flowers—and two miniature rosebushes in congratulations.

Ah, the kindness of others. It really does exist, you know…

And here is more kindness from Mike Casper: 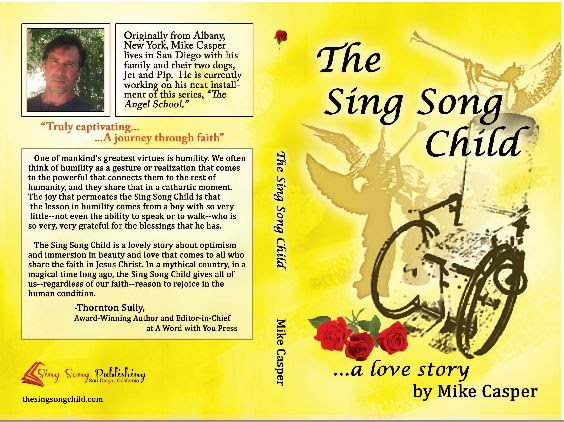 To buy a softcover book on Amazon

To buy an e-book on Amazon

To buy an e-book at Barnes and Noble BN Nook