FJ Dagg and I have always been (for the most part) at polar opposites in our worldview, so posting this  is gonna be fun:  I have not even read  his entry before writing the introduction.  Let’s see if I am correct that it will contradict my own view of the world.  The reason I am doing this has everything to do with the nature of this contest: creating a dialog, not monologue.  What is lacking in the current landscape of American discourse is respect for opinions of others who disagree with us.  James once expressed  his pleasure in hearing Mitt Romney, praising him as being almost Reaganesque, and I condemned Romney for the same reason.  The point is, James and I remain cordial, and understand that civility allows us to be critical, assaulting the nonsense of each other’s positions without assaulting each other. And, he’s a good writer.

Here is a recent picture of FJ Dagg:

And of me, before the beard grew out:  Polar Opposites! 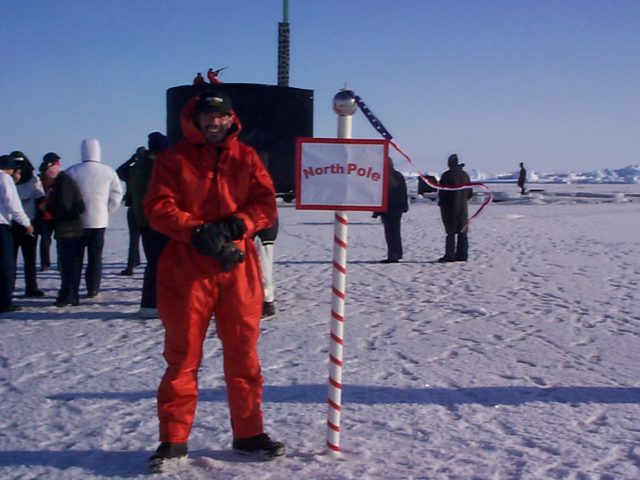 Though not yet thirty, she appeared middle-aged. The faded pink sweat suit she wore had fit, more or less, two years ago, at the time of the last clothing allotment. Perhaps next year’s—should there be one—would include a warm jacket and shoes. Her pale white face pinched, and her lips moved slightly as she read “Ministry of Child Development” in great, bold letters above the immense building’s entrance. As directed, she had brought her son here at 10 AM and was now returning for him at 4 PM, as directed—as all of this society were directed: upon reaching twelve years, all children were comprehensively tested in order that the State should set them on the path best suited for them, for society, and for equality.

“So how’d he do?” the woman asked the Ninth Assistant Deputy Coordinator to the Regional Sub-Under-Secretary of the Fifth Minister of Child Development, Northeastern Sector.

The bureaucrat’s lips parted, but she did not immediately speak. Then she smiled and said, “Your son’s results presented us with a…a special case.”

“Special…,” the woman echoed, as she eyed the other’s pearl grey silk blouse.

“Yes. Well…the fact is that his verbal scores were extraordinary…”

“…which is to say, perfect.” The bureaucrat glanced at the monitor on her desk. “Our records show no other child ever having achieved a perfect verbal score. Can you tell us, please, who the father is?”

The woman’s face betrayed surprise, then puzzlement, and then twisted in a sly grin. “Now, I ain’t one o’ them prissy kinds o’ gals what keeps track o’ every…”

“Of course. But we would like to know…if you can recall.”

“Well…that woulda been…,” The woman’s face became a caricature of concentration. Her eyes narrowed as she counted on her fingers. At last she looked up. “It was prob’ly the white one.”

The bureaucrat made an expression the woman couldn’t read, and her red-lacquered fingernails tapped the keyboard.

“From that ol’ liberry buildin’ other side o’ town. Heard the place is fallin’ down, so’s I told him to stay clear of it, but would he listen?”

“Go on, please…,” said the bureaucrat.

The woman went on. “Boy’s always yammerin’ about things what happened a long time ago. All them different countries, and kings, and wars, and old music, and fancy pitchers…and books. Ha ha! Readin’ books ‘bout books…how wack is that?

The bureaucrat began to reply, but the woman, with a sudden guilty look, cut her off.

“The other kids is good, though! ‘Tween Gov’m’nt school, and the pills, ‘n’ TV, they turned out OK.”

The other woman’s eyes went far away and she shook her head slowly.

“Nobody can say I din’t try. His teachers give me them pills…said they’d fix him up, calm him down, ‘n’ all, but it wasn’t no good. Thinkin’ back…I wonder if he hid ‘em…didn’t take ‘em at all. He’s smart, all right…too smart, maybe.” She pursed her lips and shook her head again.

“Anyways, it’s got so’s I can’t make him even look at TV no more. All I ever hear is a lotta wack ‘bout what he calls ‘floss-fee.’ Crap like ‘Sock-tease,’ and ‘Play-dough,’ and ‘Shake-speare…,’”

She emitted a braying cackle. “Howzat for a dumbass name, ‘Shake-speare?’” She rolled her eyes and the plastic chair beneath her creaked as she shifted her bulk. “But lately he gets all excited ‘bout them foundered fathers…”

The woman droned on. “…boy can’t shut up about it…old times when people was fightin’ over ideas, like ‘rights’ and ‘freedom…’stead o’ real stuff, like phones ‘n’ TV… Says they talked a lotta smack ‘bout the Gov’ment…”

She halted, glanced up, then plunged on,“…and…and…when they hadda do most things for theirselves…” Her lip curled and she shook her head. “Lotta crazy talk.”The bureaucrat folded her hands on the desk and her expression became grave.

“Of course. But…I’m afraid there’s also some…other news.” She glanced again at the monitor. “Your son’s mathematics scores were only average…,”

“Well that ain’t no s’prise,” the woman interrupted. “He always did hate them number shows the worst…, y’know, with them puppets?”

“Yes. But mathematical ability is critical. Taken altogether, scores such as your son’s would prevent one from becoming a Programmer, or even a Facilitator…”

“…but the most troubling thing was that he insisted on talking to the Examiners about the Founding Fathers. You mentioned them, do you remember?”

The woman shrugged and her eyes narrowed. “So, uh…how bad is it?”

The bureaucrat drew a breath. “I’m afraid we had no choice but to euthanize him.”

The woman frowned. “You mean, like…dead?”

The Ninth Assistant Deputy, etc., etc., etc., essayed a sympathetic expression, while the woman’s face reflected surprise, then puzzlement, and then the shadow of something like sadness.

Then she brightened. “Well, anyways…guess I won’t have to hear no more wack ‘bout them foundered fathers!”

I believe a snowball fight is about to ensue!

According yo a recent pole, sometimes you got to bend over backwards to accept a different point of view