Don’t be embarrassed if you are old enough to remember Spanky and the Little Rascals, and the Our Gang comedies.  If you remember, did you get the sense that Buckwheat was just another one of the kids?  Sal Buttaci recalls a time when being a member of the gang was all about having fun with kids in the neighborhood. Sal has been coming to our playground for the seven years we’ve left the gate open. Here he comes again!

Only a fool would look back on childhood and insist they were the best of times and that those who populated those years were exemplary men and women of honor. But what did this boy of nine understand of the world? Even of our Brooklyn neighborhood?

In our cold-water tenement flat, laughter came easily. Papa and Mama had survived the Great Depression, so what could dampen their gratitude which they constantly paid in prayer and joy?

My father at fifteen emigrated from Sicily in 1920, a time in America when the treacherous Black Hand mobsters preyed on their own people and gave all Sicilians a bad name. It encouraged non-Sicilians to join in with hurling names of their own: Guinea, Wop, Dago. But Papa, though he warned us not to trust gli Americani, he made it unquestionably clear that we were never to insult others for their ethnicity, creeds, skin color or for whatever made them different from what  we were.

We lived on the second floor of this old building long since condemned. On the ground floor, side entrance, Mr. Smith, an old black man with Parkinson’s, worked as a blacksmith. Once my sisters and I joked about him, a blacksmith named Smith who was black, and whose hand shook so badly, it was a wonder he could shoe the horses the policemen and the junk-wagon owners brought him. Papa came to the old man’s defense. We were ashamed. “Don’t be like the other people,” he said. “They let their pride lift them up so high they can’t see how easy it is to break hearts.”

Behind the blacksmith shop, the old man lived with his son, daughter-in-law and their eight children, though only the names of two do I remember: JW and his sister Virginia Smith, my first girlfriend.

On sunny Saturdays, my parents would lead the way to Melrose Park. Behind them followed my sisters Anna and Joanie, the Smith kids, and in the rear, Virginia and I holding hands.

If pedestrians, drivers or passengers, or neighbors laughed at us or called us names, I honestly don’t remember, so wrapped tightly was I in Virginia’s gentle hand. We were like a parade on our march down Graham Avenue. We were feeling the love that seemed to lift us all out of the doldrums of prejudice.

We little kids ran toward the open gate of Melrose.

Our placard, the one that serves as both prompt and trophy, would have been hanging in a diner the time the featured photo was taken.

And, as Sal points out, it was not the best of times for everyone. 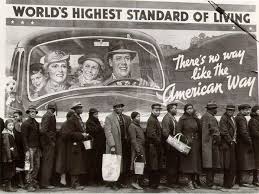 28 thoughts on “Sal Buttaci enters the fray as Contestant #18”