Sometimes, James Bond tends to bore me (because there are only so many times you can introduce yourself as, “Bond. James Bond”, before a woman wants to rip out her Goldneye…so to take a break, we would like to introduce you to Bladen. Thomas Bladen.

Oooh. Edgier than Bond, right? Don’t tell him I said that, or the man will shoot me with a golden gun.

1) What inspired you to write this book?

That’s going to have to be a multi-layered answer!

Shadow State is the fourth novel in the Thomas Bladen ‘Spy Chaser’ series. He first came to life in a novel writing summer school at Falmouth University back in 2007. He appeared (in my head!) fully formed and gradually told me his story. Book four follows on from the previous books (Standpoint, Line of Sight, and Cause & Effect), but can be read as a standalone novel.

One of the seeds for a recurring plot theme in the series, that of a Shadow State that spans Europe and operates like a transnational corporation or an unelected government, in parallel with the European Union, was inspired by a hisotiral event. In 1946 Winston Chruchill have a speech in Zurich in which he proposed a United States of Europe. I wondered what might have happened if a group of military leaders and industrialists had made their own arrangements outside the logal and political process. By 2004, when this latest book is set, Thomas’s previous work in the UK’s Surveillance Support Unit has put him on a collision course with a senior figure in the Shadow State.

When Surveillance Officer, Thomas Bladen, is confronted by a Shadow State operative, he is given a stark choice – expose a defector or face the consequences. But who is the real enemy? A stake out becomes a rescue, an intervention leads to murder and loyalties are stretched to breaking point. Soon Thomas is forced into a dangerous game, turning the Shadow State against itself. Shadow State – intrigue, action and sardonic British humour.

3) What are some challenges you overcame in writing this novel?

Readers of the series expect ‘the same but different’. They want consistency in the characters plus some development. They also need to see that the events of previous books have shaped this one, although I’ve striven to make every book a standalone novel as well. This time I’ve played around with some of the conventions in previous books to keep readers guessing!

There have been practical challenges too, balancing novel writing with freelance writing and also working part-time in a local health office.

The other main challenge has creating a satisfying resolution to Shadow State while still leaving the door open for the fith book, currently pencilled in as…and this is an AWwYP world first: No Defence. It’s a cunning plan worthy of Blackadder!

My stock answer would always have been an emphatic “No!” before because JB is a member of MI6, while Thomas’s background before joining the Surveillance Support Unit three years earlier was very much as a civilian. That’s his strength. As US agent Stephen Heick tells him, “I like you, Thomas. You haven’t come out of a box like most of the people I deal with in the community.”

But the reboot of the James Bond franchise, brilliantly played by Daniel Craig, has given contunuity to the films, much like the equally epic Jason Bourne films starring the equally epic Matt Damon.

So, now I’d say that Thomas is like a little like James Bond in that:
– He’s not really a team player.
– He’s not afraid to make hard choices.
– He believes in justice, even if it’s sometimes his own definition!

Where they differ is that Thomas has a relationship and close ties to a family (it’s Miranda’s family though). He’s also less educated and rougher around the edges. You could say he’s more Heathcliff than Mr Darcy! As I draw inspiration from Raymond Chandler, Thomas and Karl also have a fondness for one-liners. The swearing is all my own contribution!

5) What are some plans you have for the future with your writing?

On your marks, get set, here we go:
a) Write the fifth Bladen book, No Defence, next year.
b) Get an agent / publisher for Scars & Stripes, my semi-autobiograpohical novel about my year living the American Dream in the late 1980s.
c) An ebook collection of short stories, Into the Void, next year.
d) I’d be very keen to see if the Bladen books could be adapted for radio or television. I did approach a TV producer this year but the trail has gone colder than Wisconsin in December.
e) Be open to inspiration and opportunity.

6) Where can we find out about this book and the others in the series?

Here’s the best link for my books:

HOWEVER….
I have ten review copies of Shadow State available to AWwYP readers in either PDF or MOBI formats. All I ask is that you don’t share the file and you put a review on Amazon after you’ve read it.

Shadow State is a British thriller of around 60,000 words, so it’s a snappier read than the first couple of books.

People can contact me at derek@awordwithyoupress.com, stating their preference.

Catch you on the flip side. 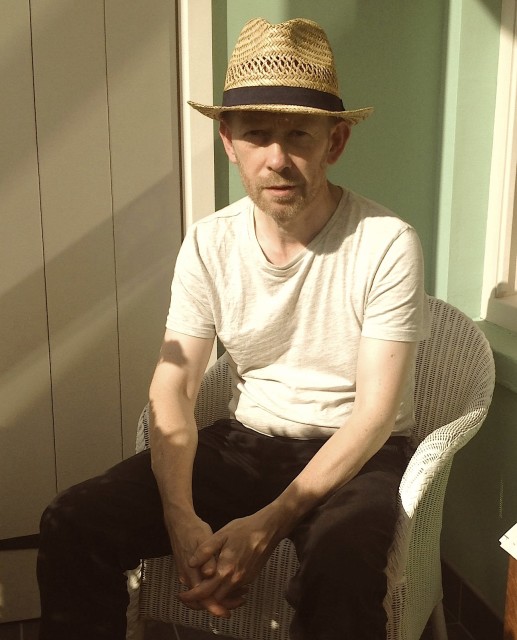 Well, there ya have it, folks! Please show Derek some love and support!

4 thoughts on “Lurking in the Shadows…”