Literati! Sal Buttaci never fails to entertain, in this his final entry into our contest, one you can sink your teeth into!
According to the cyber-patrol, I have only one story left to post in our contest. (Miryam, that would be vous!) If your story fell through the cracks, now is the time to let me know. Tomorrow I will put up a post that will allow every competitor AND everyone who left a comment to help select our winner. 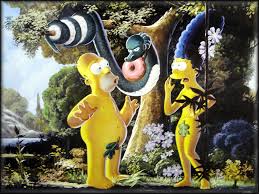 Eve sat in a quiet corner of the garden contemplating crime and punishment while Adam, spitting out the sweet peel of the apple, cursed the day the woman appeared and the Creator made her his companion. “For this I gave up a rib?” he asked no one in particular. “For this I’m collecting fig tree leaves to make myself decent?”

Meanwhile, the tree serpent boasted, “What’s the big deal! So you took some bites out of the forbidden fruit. All your future sins should look so petty. Or as somebody someday somewhere will announce on some vaudeville stage, ‘You ain’t seen nothing’ yet.”

“What did one infected tooth say to another infected tooth?” the serpent asked, then hissed a soft two-stepper to the da-da-ra-ra blow of a trumpet.

“Get dressed, Miss Molar. The dentist is taking us out tonight!”

The tree serpent laughed maniacally. It spun sinuous loops around the bark of the Knowledge Tree. “Get dressed, Miss Molar,” he repeated, then laughed so raucously it was a foregone conclusion that within its dark scaly body resided choirs of demons dancing and singing to the tune of the Tempter.

Then Eve brushed away the tears that had flowed for the first time and asked, “Another Eden? The Garden of Vaudeville?”

“Where anything goes, Evie Baby. Where you can eat the fruit of every tree till your tummy turns green but you keep on feasting. And there’s nobody to tell you this you can, this you can’t. That’s what Vaudeville is!”

Then from somewhere outside Eden the strong winds began to huff and puff and swirl above them. “You disobeyed Me,” said the Creator’s voice from within the black-sky maelstrom overhead.

Adam fell to his knees. “A second chance. Please! We’ll do it right this time.”