Ah Literati! A guitar from a pawn shop? A sunburst pattern? Sounds vaguely familiar. KYLE Katz got the memo from all the other kids in the playground (that would be vouz): gate’s unlocked. Enter at your own frisk! Welcome back, my dear! 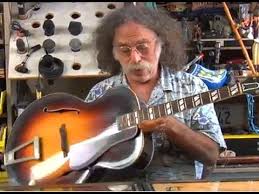 He turned his heart away from me, locked his emotions inside a lead drum. His tongue now pitted with a language so profoundly distance from the beat that made our hearts bond. His smile whisked away into another domain. Umbilical chord deliberately buried in a barren land. A land where young boys turn into men.

“I found something funny on YouTube.” I laugh out loud. “Come watch.”

He reluctantly excavates himself from his media room after 15 minutes of no interest in wanting to view what lame thing I found to make him laugh.

He stares at the screen apathetically and presents that now extremely handsome face with a treasure of thick black hair that twirls around one side of his piercing turquoise eyes.

He wears a white v-neck t-shirt… always pressed. His muscles defined from his strenuous workouts and love for aikido.

He rubs his fingers through his hair.

“I’ve already seen this mom…like a year ago. It’s not funny.”

He swaggers away. Geez, when did that happen? My stomach tightens.

The new guitar– that hollow body sunburst guitar he got for his 15th birthday starts wailing…the one he saw hanging in the store window of the pawn shop. The price tag he swore was out of reach. I could hear him through the barricade.

His fingers move at lightning speed.

He layers his original vocals on top of his perfect rhythm…thick and raspy with intent. I don’t even recognize the voice.

He slides open the media door that screeches like an emergency exit of metal on metal. As if a seal has been broken to get out…or in.

“Mom, come in and hear this, my new song. its my best work yet!”

I swaggered in. Our eyes meet…lingered…we smiled once again. You could still hear the distant drums. Heartbeats pulled in by a moment of a glorious sunburst. One hidden tear… unlocked.