“The birds they sing, at the break of day. ‘Start again,’ I hear them say. “Don’t dwell on what has past away, or what is yet to be.” (Leonard Cohen) It appears Mr. Cohen has read this poignant reflection from Karen Comer. As I post this, thunder crushes the silence in the gray, Moscowvian sky, and rain begins to pelt the glass in Karen’s well-written story. If there is anything in this world more powerful than the written word, it is forgiveness.

The weeds won’t recede from the mossy path she swept and weeded. A late daisy nods her head. A breeze stirs sycamore leaves, creating autumn tapestry on un-mown grass.

The child stirs me back to reality. “Grampa, where Gramma?” A dribbly mouth finds my stubbly chin. A chubby hand slaps the steamy pane. Raindrops zigzag down like the tears which refuse to come to me.

A tiny finger points. I whistle a tune and bounce her as we enter the kitchen where her mother tends bubbling pots; but the child still points back to where we’d stood.

My daughter wipes her hands, leans on the counter. I know that look.

Look at this house! When did you last do anything?

I shrug as the child wriggles free and wobbles back to the sunroom door screaming with delight, pounding tiny fists on glass.

My daughter crosses arms while I stare at the table. Three knives and forks are set.

Mom says since you retired you gave up living! You stare at the TV all day while she cooks, cleans, shops, and maintains that enormous garden!

Is that why she left?

You’ve been married forty-odd years, you figure it out!

She should have said something…

The child’s squawking reaches a crescendo and I turn to see what’s wrong.

See? You react to the baby instantly but you still don’t understand what your wife needs, after caring for you every day for 40 years!

I have nothing else to say in my defense.

Go on a cruise, you cut the damned grass! How can you be so upset about retiring from a job you hated, when your wife’s the most precious thing you’ll ever have! Snap out of it, Dad!

So where is she?

Our bony palms press together on the window and she smiles at me. I know I’m forgiven, and vow, henceforth, to start living again. 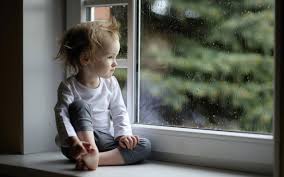