Literati!  I am on the rise!  (Do you really knead to know more?)

You may recall our contest is a two parter–one story with twenty cliche’s, and one hundred worder that takes a cliche and makes it seem fresh out of the oven, unsullied by overuse.

Sal Buttaci, if you will pardon the cliche’, is back in a flash! (oventually, my humour will be apastryated)

“A little yeast works through the whole batch of dough”

“Vladimir’s Pizzeria? You gotta be kidding me. You want business? Call it Angelo’s, Bella Italia’s, Mama Mia’s,” but my stubborn Muscovite neighbor would have none of it. He who had abandoned a lifelong fantasy of grand-opening a pizzeria in Red Square had settled for cutting a ribbon in Green Square, Memphis.

“Angelo, Shmangelo,” argued Vlad, shrugging. “What difference? A little yeast works. Through the whole batch of dough I mix in some tender Russian care, sprinkle cheese, tomatoes,  (here his three gold front teeth sparkle like a Hollywood marquee) and a Vladimir Pizza Czar is born!

Salvatore Buttaci has been writing and seeing his work in print since 1957. He currently has two collections of short-short stories published by All Things That Matter Press. Flashing My Shorts and 200 Shorts are available in book and Kindle editions at  http://www.kindlegraph.com/authors/sambpoet

Sal lives in West Virginia with his wife Sharon.

AND I figured I should doughnate something to give you a rise:

I Got this from a Friend on Facebook who must have seen this. 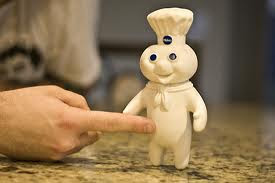 ATTENTION… Please join me in Remembering YET ANOTHER great icon of the entertainment community. The Pillsbury Doughboy died yesterday of a yeast infection and trauma complications from repeated pokes to the belly. He was 71. He often worked under the stage name of Poppin’ Fresh. During a brief rap career in the late 90’s, he was also known a P. Dough Boy. Dough Boy was survived by his wife Play Dough, three children, John Dough, Jane Dough, and Dosey Dough, plus they had one in the Oven. The Funeral was held at 3:50 for about 20 minutes.

Dozens of celebrities turned out, including Mrs. Butterworth, the California Raisins, Hungry Jack, Betty Crocker, the Hostess Twinkies, Captain Crunch and many others.The graveside was piled high with flours as long-time friend, Aunt Jemima…, delivered the eulogy, describing Doughboy as a man who “never knew how much he was kneaded.”

Doughboy rose quickly in show business, but his later life was filled with many turnovers. He was not considered a very smart cookie, wasting much of his dough on half-baked schemes. Despite being a little flaky at times, even as a crusty old man, he was still considered a roll model for millions.

Toward the end it was thought he’d raise once again, but he was no tart.

5 thoughts on “Just when you yeast expect it!”